The Sumatran tiger, Panthera tigris sumatrae* is the smallest and darkest tiger subspecies and tends to be more bearded and maned than the other subspecies. It is the only remaining island living tiger in Indonesia and inhabits a landscape that ranges from sub-mountain and mountain forest to lowland forest and peat forest.

Their range size is estimated at 52 km2 for a male and a much smaller 27 km2 for the female of the subspecies.

It is estimated that there are fewer than 400 mature individual tigers in Sumatra in isolated pockets of protected land. Three of the protected areas are classified as UNESCO World Heritage Sites but all are in danger of losing this status due to threats from poaching, illegal logging, agricultural encroachment and planned road building.  It is for these reasons the Sumatran tiger is classified in the most severe IUCN status: Critically endangered.

Learn about how we are working to protect them in Sumatra and to support our conservation efforts you can become a supporter, and get a gorgeous box of Sumatran tiger themed mementoes to thank you for your support.

Description:  The Sumatran tiger is the smallest and darkest tiger subspecies and tends to be more bearded and maned than the other subspecies.  Male tigers can expect to reach somewhere in the region of 120kg and 8ft from head to tail vs females who average 91kg and 7ft length.

Breeding:  Female tigers are sexually mature at about 3 or 4 years of age and males at about 4 to 5 years. Mating may occur any time during the year, but most frequently takes place from November to April. Females enter estrus every three to nine weeks and are receptive for three to six days. A male and female meet only during this brief time to mate; however, he may stay in the area. The female tiger is an induced ovulator, meaning that her ovaries do not release eggs until mating occurs. After a gestation period of 100-108 days, female tigers will seek out a secluded den to give birth in. Litters may range from one to six cubs, though the average litter size is 2-3. The female always rears the cubs alone.

Longevity:  In the wild, a tiger can live 15-20 years, captive breeding programme data suggests this could be even more for tigers in zoos.

Prey: In Sumatra, tigers primarily eat wild pigs, sambar & barking deer, and primates such as macaques.  Tigers are able to take down prey up to 4 times their size, and prefer to consume larger animals, especially in the case of a mother feeding her young.  However, as an ‘ambush predator’, a tiger will hunt whatever species is easily available, including fish and birds!

Hunting habits: Sumatran forests are generally abundant in prey, though problems arise when forest dwelling communities lay snares to catch pigs and deer for their own consumption.

If prey base is significantly depleted a wild tiger is much more likely to stray into more populated areas to predate livestock, causing serious and potentially fatal conflict issues. Snares are indiscriminate, while they may have been laid for a prey species, it will not stop them from harming, or killing a tiger.

Learning to hunt: Unlike smaller cats tigers do not begin to hunt effectively until their permanent canines come through at around 18 months old, leaving them vulnerable and reliant on their mothers. Predominantly hunting skills are learned through predatory play and observations, which is why you often see young cubs “wrestling” with each other.

All tiger subspecies are threatened for a number of reasons, and all WildCats projects address all or a combination of these priority areas; poaching, habitat loss, prey base depletion, human-tiger conflict and disease.

Poaching:  Back in 2011, the FFI Tiger Protection Team warned of a sinister new trend threatening the Sumatran tiger.  The birth of “poach-to-order” coupled with a black market rise in the value of wild tiger parts, saw an unprecedented increase in poaching activity.   It became clear in this region, that poaching was not a crime committed by low-level criminals, it was (and still is) led by highly organised, transnational criminal syndicates. Our projects have significantly reduced this threat by carrying out intelligence-led investigations, which in 2017, led arrest and conviction of on average 1 poachers or trader a month.

Habitat loss: Indonesia is the world’s largest palm oil producer, having converted as much as half of their rainforest to agricultural land, predominantly for oil palm plantations.  This isolates wild tiger populations, leaving them prone to poachers and increased inbreeding due to the reduced gene pool of possible mates.  It is not just large corporates responsible for this destruction, smallholders can be equally culpable for illegally clearing land in National Parks.  We urge wild tiger fans to always check the provenance of their Sumatran coffee, and if its origins are unclear to question why.

Prey base depletion; tigers need little to survive, safe space, access to food and mates.  In Sumatra, especially towards the end of the Ramadan fast, forest-dwelling communities and tigers are often in competition for the same food.  Rudimentary traps laid to trap deer can seriously injure or kill tigers.

Human-tiger Conflict: In Sumatra, our projects work with local communities to mitigate conflict issues, before they can escalate to fatalities to livestock, humans or tigers.

Disease:  In many regions, tiger populations are fragmented into small groups. They are left vulnerable to diseases such as Canine Distemper Virus, (CDV), as well as a host of genetic problems caused by a reduced breeding pool.

Habitat: The Sumatran tiger is the only remaining island subspecies, it inhabits a lush, dense landscape that ranges from sub-mountain and mountain forest to lowland forest and peat forest.

It is estimated that there are around 400 – 500 individual tigers wild in Sumatra in and around these isolated pockets of protected land. Three of the protected areas are classified as UNESCO World Heritage Sites but all are in danger of losing this status due to threats from poaching, illegal logging, agricultural encroachment and planned road building.

In Kerinci Seblat, where we have been supporting the FFI Tiger Protection Team, serious threats continue to be recorded to tiger habitat from illegal forest conversion by smallholders, for coffee in highland areas of the park and, in the west and south-west of the national park, for palm oil. 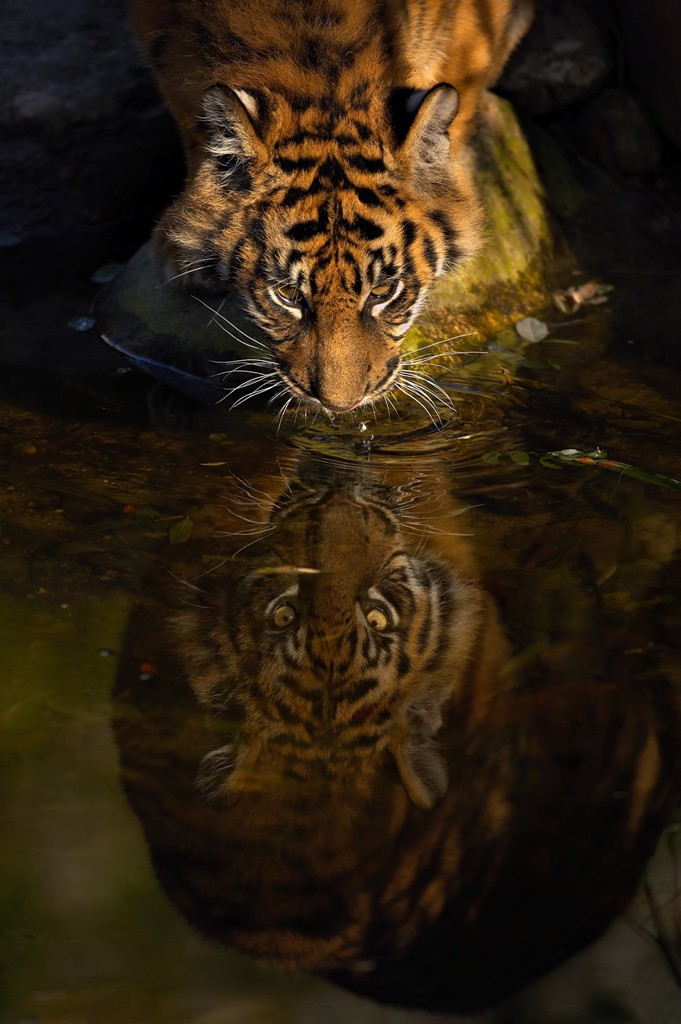 *A revised taxonomy of tigers from the IUCN Cat Specialist Group in 2017 recommends that there were only two subspecies of tiger rather than the nine originally thought. However, this was refuted by further research published in 2018.  Given the varied interpretations of existing data, the taxonomy of this species is currently under review by the IUCN SSC Cat Specialist Group.