We aim to keep the latest Amur leopard facts here for you.  If you can’t find the information that you need please do get in touch and we will do our best to help.  To support our conservation efforts you can become a supporter, and get a gorgeous box of Amur leopard themed mementoes to thank you for your support.

The Amur Leopard or Far Eastern Leopard (Panthera pardus orientalis) is one of the eight subspecies of leopard. It is only found in the Russian Far East and North East China and the latest population census taken in 2017 suggests there are now around 100 individuals.

As recently as the 1970s, their population in the wild had dwindled to fewer than 30 individuals, making the Amur leopard is one of the world’s most endangered big cats and for this reason it is listed as Critically Endangered by the IUCN, and CITES Appendix I for protection status.

Breeding: Females first breed at an age of 3-4 years. After a gestation period of around 12 weeks, cubs are born in litters of 1-4 individuals, with an average litter size of just over 2. The cubs stay with their mother for up to two years before becoming fully independent. Amur leopards in zoos show some evidence of breeding seasonality with a peak in births in late spring/early summer.

Longevity: In the wild, leopards live for 10-15 years and they may reach 20 years in captivity.

Hunting Habits: Amur leopards normally hunt at night and need large territories to avoid competition for prey. They silently watch their prey and ambush them using a burst of energy reaching speeds of up to 35 miles per hour.  They then carry and hide unfinished kills, sometimes up trees, so that they are not taken by other predators.

With a wild population of fewer than 100 individuals, the Amur leopard is critically endangered and this is mostly a result of human activities.

The main threats to the Amur leopard’s survival are:

Poaching:  Poaching of both leopards and prey species is a serious threat. Forests in Southwest Primorye are relatively accessible, the area is more densely populated than most of the Russian Far East, and Russia has a hunting culture both for sport and for food. The two main cities of Primorski Krai – Vladivostok and Ussurisk – are only two or three hours drive away, so the leopard’s range holds some of the most popular hunting grounds for city residents.

Forest fires:  These are a direct threat to Amur leopards as they reduce the animals’ natural forest habitat, replacing it with grasslands that leopards prefer to avoid.

Inbreeding:  With a population that dwindled to 35 individuals only a few decades ago, this is the only big cat with international approval to be considered for reintroduction using captive-bred Amur leopards.

Development:  Southwest Primorye is located close to the Russian borders with China and North Korea, making it an attractive area for infrastructure projects such as new railways, gas and oil pipelines and ports. In 2005 and 2006 ZSL and its local partner, Phoenix Fund led a successful international campaign against a plan to build an oil pipeline terminal on the coast of the Sea of Japan in the range of both the Amur leopard and tiger.

Disease:  Diseases such as Canine Distemper Virus (CDV), are threatening the isolated and vulnerable Amur leopard population. We are working with scientific partners to understand exactly how this disease is contracted by leopards and its origins.

WildCats is working hard to reduce these threats by funding appropriate conservation projects and educating and informing people about the importance of the Amur leopard and tiger.

Location: They are found in Southwest Primorye in the Russian Far East, and along the Russian border with Heilongjiang Province and Jilin Province in North East China. It is possible that a few leopards also exist in North Korea, but so far we have not been able to survey this area.

The Amur leopard is the northernmost of all leopard subspecies. Its historic range extended throughout northeastern (“Manchurian”) China, the southern part of Primorsky Krai in Russia and the Korean Peninsula. This range shrank dramatically during the 20th century, due primarily to habitat loss and hunting.

At the turn of the 20th century, the leopard was still found throughout much of southern Primorsky Krai. The first reliable estimate of leopard numbers in Russia was made by Dmitry Pikunov and Vladimir Abramov in the winter of 1972-1973. By this time, the population in Primorye had already contracted from one contiguous population into three isolated ones and there were an estimated 38 to 46 Amur leopards remaining in Russia, many of which depended upon habitat on both sides of the Russian-Chinese border. A 1985 survey suggested that leopards had disappeared from the area southwest of Lake Khanka and from southern Sikhote-Alin. The leopard population in southwest Primorye remained approximately the same as the 1972 survey, 25 to 30 animals. A more recent count in the 1990-1991 winter revealed the population size in southwest Primorye to be stable at 30 to 36 animals, if migrants to and from China were included. The most recent results from population monitoring in 2011 suggests there are now approximately 40 individuals and surveys carried out in China in 2012 estimate fewer than 20 leopards living in that region.

The Amur leopard probably went extinct in the wild in South Korea in the late 1960s, although some recent, unconfirmed reports suggest that a few leopards may remain in and around the demilitarized zone between North and South Korea. There are likely still leopards in the rugged northern region of North Korea near the Chinese border, and it is also likely that animals from Southwest Primorye in Russia occasionally cross the border into North Korea, but reliable information is lacking.

Competition: Although in other regions it seems leopards do not do well in areas where they share territory with tigers, this has not proved to be the case in Russia. Studies have indicated that an increased tiger population in the Southwest Primorye area has not adversely affected the leopard population. 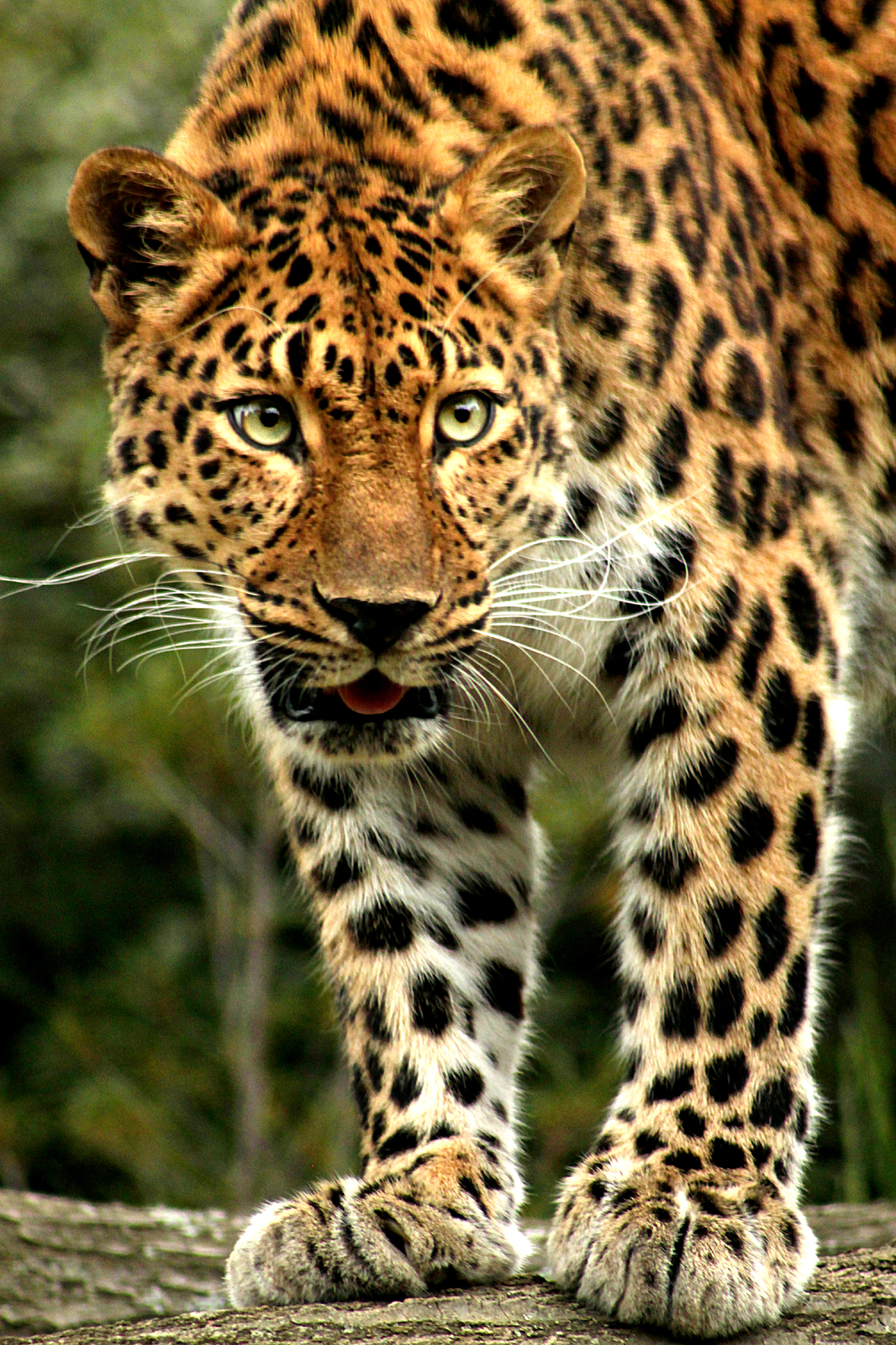