The Amur tiger, Panthera tigris tigris, (formerly Panthera tigris altaica) also known as the Siberian tiger, is one of the largest cats in the world and today,  an estimated 500 – 550 can be found in the Russian Far East with a small number ranging across the border into China and possibly North Korea.

In the 1940s, it was on the brink of extinction with fewer than 50 individuals remaining in the wild. This was due to decades of almost continual political instability with the Russian Revolution and the formation of the Soviet Union.

In 1947 after WW2, Russia became the first country to ban tiger hunting and offer tigers full protection. Hunting of the main prey species, boar and deer, became restricted by annual quota based on the results of population counts. Poaching of tigers became relatively rare, because there was no market for skins and other tiger products, although hunters on occasion killed their “competitor” when an opportunity presented itself.

Read what our Russian projects have been up to, or explore our extensive Amur tiger facts section below.

Amur tiger coat colour is a lighter orange than other tiger sub-populations and becomes even more so in winter. Their coat is longer and thicker than other sub-populations because of the colder climate and they have a thick mane around the neck and extra fur on their paws, which protects them against the cold.

Breeding:  Sexual maturity is reached around 4 years, but varies with gender and is earlier in zoo tigers. When a female is ready to mate she will signal by leaving scratch marks and urine deposits to attract males.  Gestation last 3 to 3 1/2 months, litter size is 1-6, however, 2-4 is the most common.

Longevity: In the wild, they can live between 10-15 years, but in captivity, they live nearer to 20 years old.

Prey: The Amur tiger needs large prey to survive, and its main prey species are ungulates – wild boar, sika deer and red deer. In the summer tigers may prey on smaller animals such as badgers and raccoon dogs. Bears comprise about 3% of the tiger’s diet in the Russian Far East.  There are rare cases on record of adult brown bears being killed and eaten by Amur tigers. Brown bear cubs are killed more often (indicating that male tigers can drive away the defending mother bear) and the smaller Himalayan black bear also appears on the Amur tiger’s menu.

Hunting habits: Research by WCS (Wildlife Conservation Society) together with Russian scientists has shown that a female Amur tiger has a home range of up to 20 x 20 kilometres, and some males patrol an area as large as 40 x 40 kilometres. These large home ranges are due to naturally low prey densities in the temperate climate found in the Russian Far East. The home range of a male in his prime can include that of several females. As a result of these extensive territories it is clear that a very large area, about the size of Italy, is needed to support a viable population consisting of several hundred animals.

In Russia, key threats to both the Amur tigers and leopards are almost identical, as a result, both are considered Critically Endangered species, predominantly due to human activities including poaching, development, and conflict situations.

Poaching: Research by partners WCS, has demonstrated that human-caused mortality accounts for 75-85% of all Amur tiger deaths, with an estimated 30 tigers being killed each year. Wild tigers are still coveted for their fur and body parts, and in such close proximity to the Chinese border, implementation of rigorous anti-poaching methods (such as SMART) are essential to the growth of this fragile wild population.

Forest Fires; Forest fires are a direct threat to both Amur leopards and tigers as they reduce the animals’ natural forest habitat, replacing it with grasslands that they naturally avoid.

Their range has one of the highest annual rainfalls in all of Russia. Left alone, a luxuriant forest of mixed coniferous and deciduous trees develops, with lush understorey and copious lianas. However, due to a long and frequent fire history, much of this land has been converted to permanent grasslands which are not suitable leopard habitat.

Most fires are set on purpose by local villagers to stimulate the growth of ferns that are a very popular ingredient in Russian and Chinese dishes. As a result of fires, primary forests have disappeared and many barren hills have appeared in the developed belt along the coast and the main road in the Amur leopard range in Southwest Primorye. Today, approximately 57% of SW Primorye remains forested.

Dramatic “crown” fires that completely destroy trees are extremely rare in SW Primorye. The ground fires that are common do damage of a more subtle kind. They do not usually severely damage existing large trees, but they prevent saplings from reaching maturity and they increase the death rate of mature trees by drying the soil and causing bark damage, hence allowing access for pests and diseases. With repeated fires over time, the mature trees begin to die out and the forest is slowly converted to grassland. Once meadows and shrublands are created, fires become even more frequent and intensive and this means recovery to a forest stand is extremely unlikely. Although the total area converted is not measurable on a yearly basis, the impact across SW Primorye has already been significant and is ongoing.

Logging: While performed selectively across the wild cats’ range, habitat loss due to logging does not form a serious direct threat. However, the creation of logging roads increases access and disturbance and leads to increased poaching and fire frequency.

Inbreeding: Loss of genetic diversity in the small and isolated Amur leopard population may cause inbreeding depression (reduced numbers due to reduced reproduction and lifespan and increased vulnerability to diseases). However, additional information on the level of inbreeding and its effects, if any, is needed before conclusions can be drawn.

Habitat:  Key habitats for the Amur tiger are forests which have a complex composition and structure, resulting in a mosaic of forest types that vary with elevation, topography and history.  The Amur tiger is the only subspecies that have adapted to live in the harsh, cold northern climate.

Location: The Amur leopard shares its last remaining habitat in Southwest Primorye in the Russian Far East and Northeast China with a subpopulation of approximately 10 Amur tigers. The main population of Amur tigers can be found in the northeast in the Sikhote Alin mountain range. In 2005 a full-range count in Russia organized by WCS in collaboration with WWF and all responsible government entities estimated the Amur tiger population in Russia at between 428 and 502 individuals (up from 415 to 476 during the previous count in 1996).

Thanks to this relatively favourable situation, the Amur tiger made a unique and remarkable come-back at a time when numbers in all other parts of the tiger’s wide range in Asia were declining dramatically. In the early nineties, a poaching epidemic broke out as the Soviet Union collapsed and the borders with neighbouring Asian countries, where tiger body parts are widely used in medicines, opened up. It was estimated that as many as 70 tigers were poached annually in the early 1990s, and at that point WildCats (then ALTA) partners and WWF both developed anti-poaching projects that helped to reduce poaching and prevented a collapse of the population.

The Amur tiger’s range once included former Manchuria in China and the Korean peninsula. The Amur tiger has since become extinct in South Korea, and while its status in North Korea is unknown, it is unlikely that more than a few, if any, animals remain. In China, the Amur tiger is dependent on the small source population in the Amur leopard’s range across the border in SW Primorye in Russia. With support from WCS and WWF, in 2001 China established the Hunchun Tiger Leopard Reserve along the border. Large tracts of suitable forest habitat remain in NE China, and with improved forest management and anti-poaching we can expect the Amur tiger and leopard to make a comeback there. There are already indications that tiger and leopard populations in NE China have started to recover. 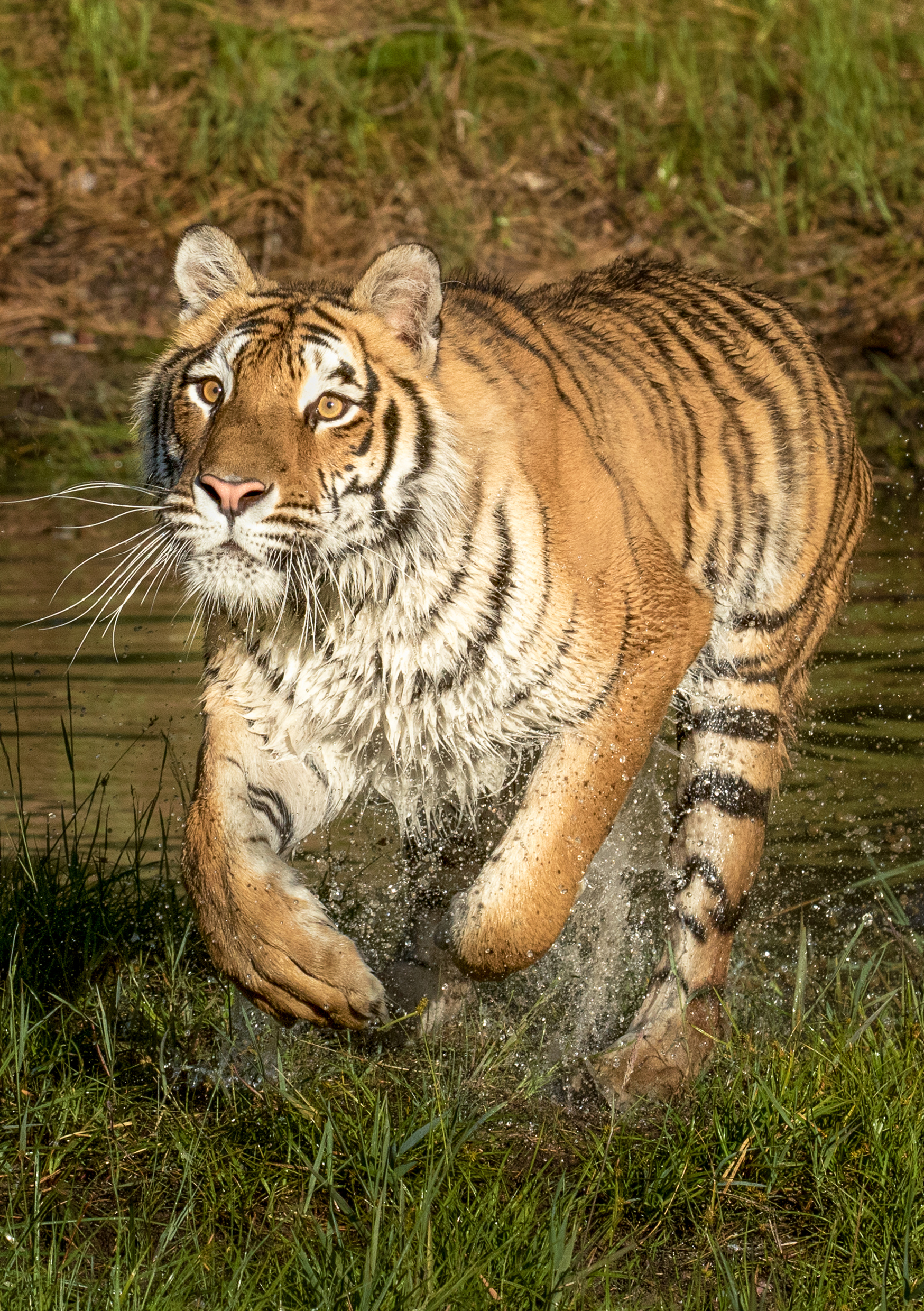